Check out our blog posts offering tips, tricks and strategies and/or suggestions on how to help your child in the area of speech and language.

The Many Ways to Use Toys in Therapy 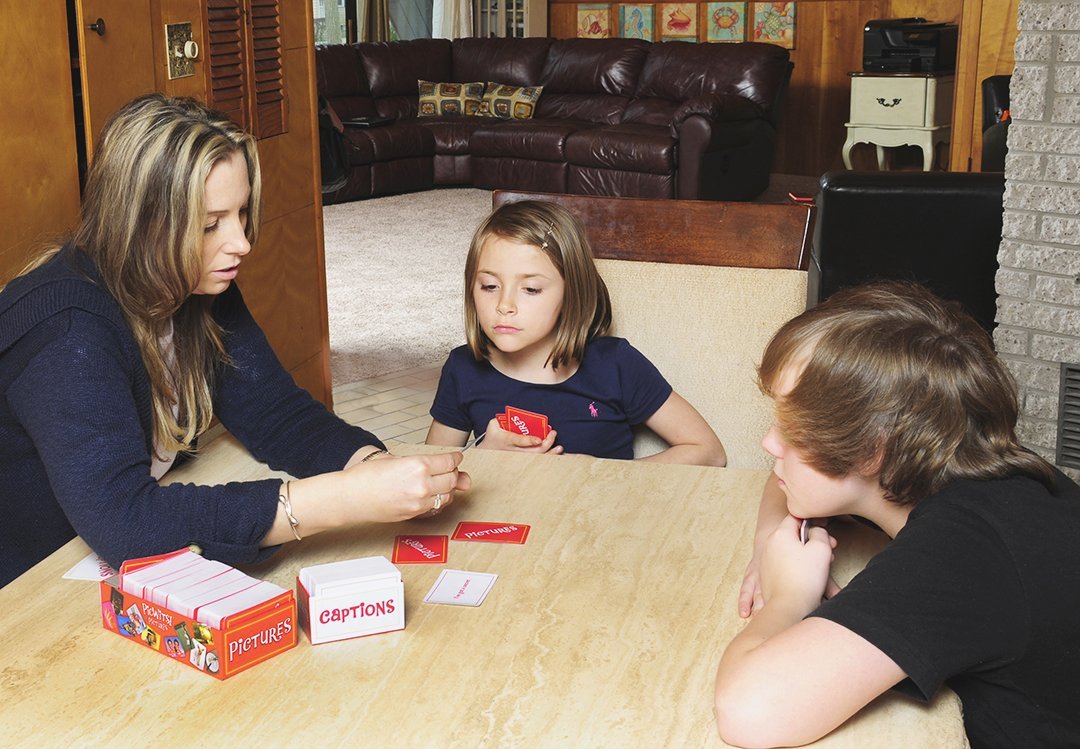 Many times we purchase games and the games are too hard or too easy or don’t correlate to skills or goals we were aiming for for our clients. That’s when you can be creative and tweak the directions to make it work FOR you!

In PicWits, the players hold 5-7 picture cards, and must choose a card from their hand that best matches the single caption prompt for that round. The game is played in rounds, and using the games directions, the winner is the first person to earn a given number of caption cards. Players earn caption cards via a single player who acts as the judge for that round. When judging, the player does not play their own card, but gets to choose the picture card that they feel best fits the rounds caption. This game is best played with 3 or more players, but can be modified for 2 player play as a therapy game.

This game has a similar underlying concept to BubbleTalk, but PicWits is easier to use with students who may still be struggling readers. This game is terrific for use in Social Skills groups, speech and language groups and counseling as well as for family game night.

In the reviewer’s opinion these are the following concepts that this game can be used to address:

This game works well with students in 2nd grade and up, but with caution can be used with younger students.

Parents/teachers/therapists will need to review picture cards when playing with younger to high school aged players due to a few of the cards portraying concepts or having items in the picture that might not be considered suitable for students in that age range. As far as I have seen there were only a few in that I felt might be questionable.

There are plenty of picture cards provided, and so supervising adults can remove any cards they deem inappropriate prior to gameplay without any concern.

Essentially the child would be asked to explain why they think their picture best matches the caption card. It requires them to explain their opinion, to create sentences, proper grammar, interpret the picture’s content and use their own words (unsolicited by the game) to connect meaning with the caption and the visual card. It can also be used with fluency clients as well as articulation and language clients. I was thrilled to see the reviewer on Amazon make the same connection I did when thinking about this game.

Even if working 1-1 you can have the child determine if your choice of picture “fits” or not and to explain why they agree or not. Therefore it can be done from both sides of the equation! They would have to look at the choices you made from your perspective that may differ from their own!

In this game you are given a set # of objects from different categories: food/fruit, animals, vehicles and dinosaurs. They are broken down by color and size which allows for comparison and addressing the following goals:

Once the piles were set and the groups established, you can ask “where are the bunnies? how many do you see? find me something you can eat” “find me something that can fly that is a vehicle/animal”.

Kids need to learn that they have to talk to get the toys – they do not come for ‘free’ so to speak. They need to work on saying things to get things. If they get them for free (i.e. without talking or doing anything) then they will continue to ‘not talk’ and hold out and refuse to talk until the item is just given to them out of frustration.

Really encourage them to SAY words when they would otherwise point or grunt. If they try but its not right – give them credit but encourage them to imitate with greater success by watching and listening to you. Sit down with them to work on saying words upon request so this becomes a habit.